A month or so ago, my colleague here at Qioto, Nicos, published a post on how the Internet of Things is affecting how we drink our favorite alcoholic libations.  It’s a good overview on the state of devices that will help you get a better glass of beer or mix up a better cocktail.  I want to add my take on these devices because of course I have an opinion.  After all, I’m connected to the internet and have a keyboard.

A little background: I’ve been home brewing beer for around twenty years.  After college, one of my roommates bought a kit and we gave it a shot.  It wasn’t too hard and I’ve been banging out batches on and off depending on my finances and access to a spare bathroom.  Most of the output has been great, especially once I got a Kegerator and stopped bottling (this removed a lot of the variation from bottle to bottle).  Aside from the beer, I also enjoy a good scotch when I can afford it, though I haven’t taken the leap into making my own (only partly due to some gray US legal issues).  Wine I don’t do and I’m not big on mixed drinks because they generally require entertaining, something that I don’t do often (it’s my beer!)

With all of that said, I am all for people buying the various beer bots if that’s what’s going to get them into home brewing.  They offer an easy, fire-and-forget way to enjoy fresh beer and for those with a busy schedule, that’s perfect.  Having said that, if you can spare two weekend afternoons spaced roughly four weeks apart, brewing is not that hard or expensive.  Equipment kits cost roughly -.  Recipe kits are around and will deliver five gallons (20-ish liters) of fresh beer.  Just add water (and time).

That is not to say that there isn’t a place for connected equipment in the more hands on approach.  Trust me, if there’s a way to get a WiFi dongle or Ethernet connection to something, I’m all for it. And I’m not alone.  There are several projects and devices out there that can help the savvy home brewer get a better handle on their batches.  Most, but not all, of these revolve around controlling the temperature of the fermenting batch.  Yeast will convert sugar to alcohol at almost any temperature, but it will also change the taste of the beer in most of those.  Each strain of yeast has a specific band of temperatures in which it will preform at its best and deliver the desired beer: ale yeasts usually like 75F (24C) while lager yeasts like 45F (7C).  Keeping it in that band is the difference between a good beer and a great beer.  The beer-bots that Nicos mentions in his post do that all for you as they contain their own refrigeration.  For the more hands-on approach, different tactics are required. 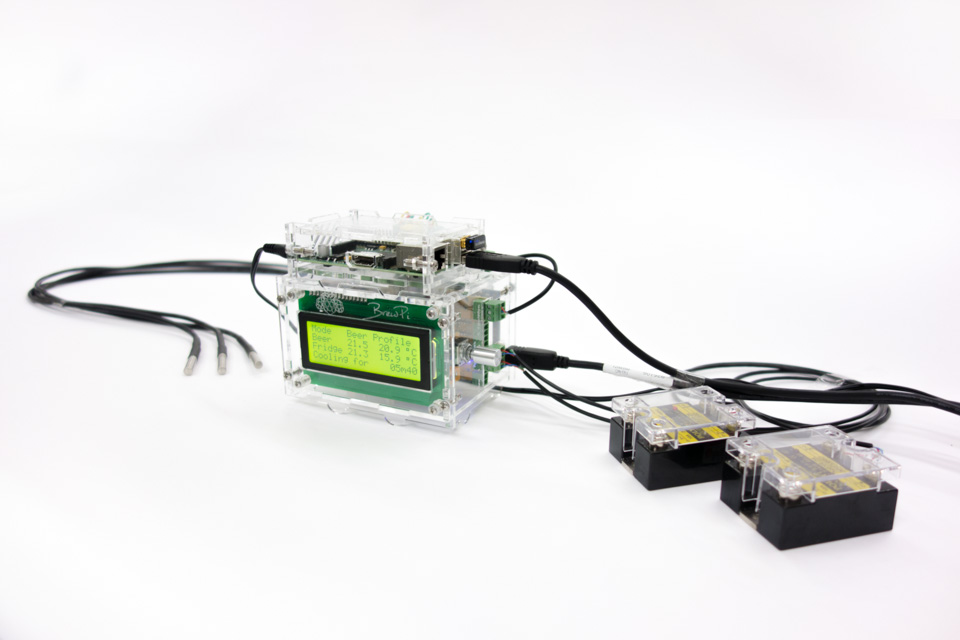 The first step in temperature control is not connecting it to the internet, but to find a chamber in which to control said temperature.  Most people end up using a chest freezer of one size or another.  Then they add temperature sensor inside the freezer and a solid state relay onto the power cord.  This ends up bypassing the temperature controller that came with the freezer.  What the BrewPi adds is an additional temperature sensor for the beer itself and the ability to add a heating element.  Then it throws all of the data up on a its own web page because it’s a Raspberry Pi.    You can then set up temperature profiles that subtly change the temperature throughout the fermentation process.  This will take the best advantage of the yeast strain that you are using.

There are other DIY projects similar to the BrewPi, but as of this writing it is the most complete.

Another important issue in fermenting beer is understanding when the yeast has converted all of the sugars into alcohol.  Most beer recipes are designed to reach a specific percentage of alcohol content by volume (ABV).  This is usually done with something called an Hydrometer which measures the specific gravity of the liquid.  It involves removing a sample of beer from the fermentation vessel, measuring it and then throwing the sample out.  Aside from the fact that you are throwing precious beer out, it also leaves many opportunities to introduce other bacteria to the beer.

Along comes the BeerBug.  It uses a floating weight suspended in the beer and isolated from infection.  It is connected via WiFi to the BeerBug servers and delivers real time data on how your brew is doing.  Has the yeast stopped fermenting too soon?  Now you’ll know right on your mobile.  No opening the carboy, no getting additional equipment dirty, much less chance of infection.

Don’t Worry, Have a Home Brew

No matter what direction you go, beer-bot or connected DIY, getting into brewing your own beer is fun, simple and rewarding.  Jump in at whatever level your budget, time and inclination takes you.  And whatever you do, enjoy.